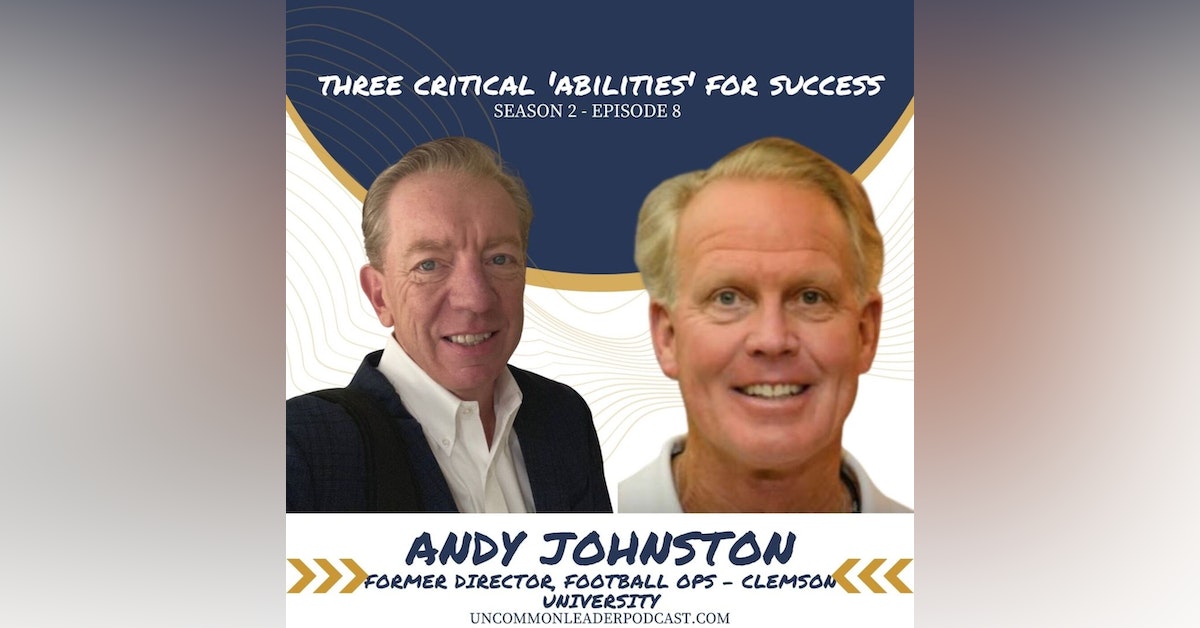 Hey listeners, Welcome back to the Uncommon Leader Podcast. Recently, I got the chance to interview the former Director of Football Operations for Clemson University, Andy Johnston.  Andy oversaw the day-to-day operations of the Clemson football program from 1997 through 2015 under famous coaches, Tommy West, Tommy Bowden, and Dabo Swinney.  Prior to his football operations career, Andy was the women’s tennis coach for 15 years at Clemson and guided his squads to five consecutive ACC titles, 12 Top-25 finishes, and six NCAA tournament appearances.  His 254 wins list him as one of the winningest coaches in any sport at Clemson.  It was this success and his leadership ability in tennis that led to the opportunity in football, a sport he had never played in his athletic career.

I love Andy’s authenticity throughout this interview and his story-telling ability kept me smiling throughout.  You’re gonna learn a lot from this interview.  Andy shares some leadership stories as well as his take on the current 'slippery slope' of NIL and the transfer portal and their affect on college sports and athletes' character development.

A few takeaways for me:

·        He challenged his daughter with three ‘abilities’ to be successful: Dependability, Reliability, Accountability

·        To succeed in a new sport with new leaders, he had to gain the confidence of his leaders.  He did this through hard work, studying his job, and being organized.

·        His mentors instilled in him the importance of hard work – “The more you sweat in peace time, the less you sweat in war time.”

·        His mantra – “Right is right – even if no-one is doing it and wrong is wrong – even if everyone is doing it… so, Do What’s Right” is simple and powerful and as he said, if we just did this, the world would be a better place.

Thanks again for listening to the podcast. If you're not already a subscriber, I encourage you to visit uncommonleaderpodcast.com to sign up now on your preferred platform. You can also catch up on all the past episodes.

If you enjoyed the podcast, please share it with a friend.  Drop us a 5-star rating with a sentence of two about what you liked.  It helps to get this into the hands of other uncommon leaders.

Until next time, go and Grow Champions!!